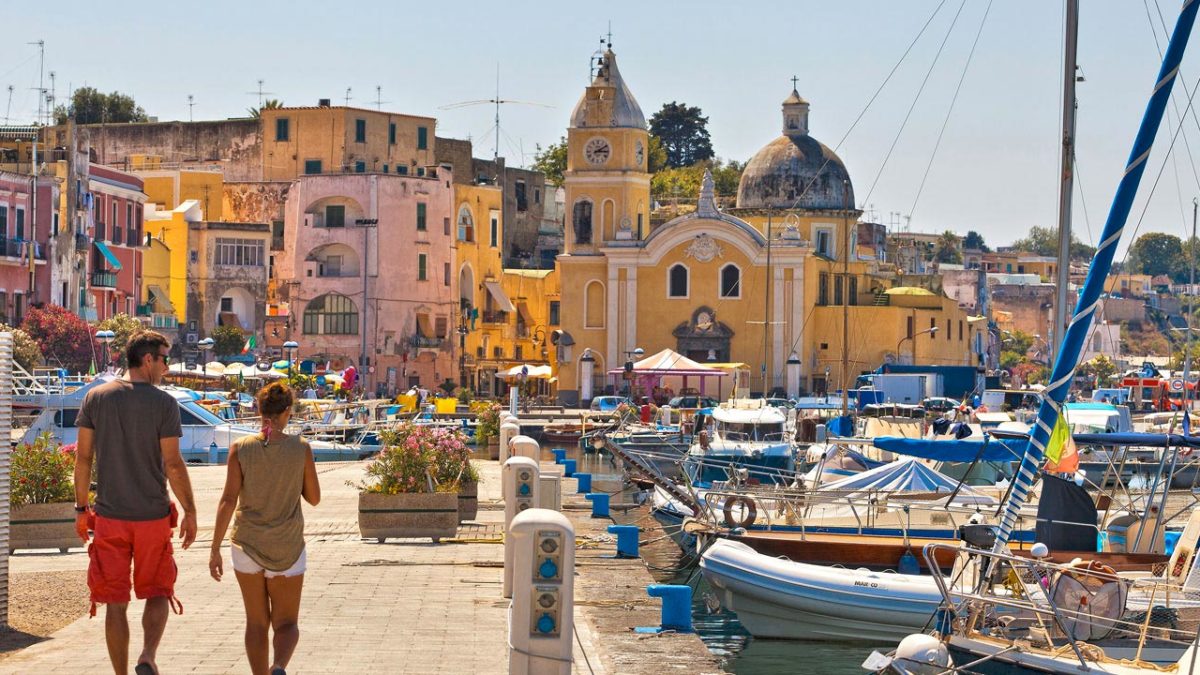 A small tour to visit Procida in a day, from Terra Murata to Chiaiolella passing through the colorful Corricella, between nature and typical architecture, between authentic tastes and atmospheres of the past. The island of Procida, just a few miles from the mainland, is easily reached in less than one hour of sailing from the port of Naples or Pozzuoli. Its small size, less than 4 square miles, makes it possible for Procida to visit practically all in one day, just know where to go and how to reach those that are the main historic centers on the island. By ferry or hydrofoil, you arrive at Marina Grande, the port of Procida, a nerve center where you can find restaurants, bars, clothing stores, handicrafts and souvenirs, as well as motorbike, bicycle, minicar and Boats of all kinds.

Terra Murata, the former Bourbon prison and the Abbey of St. Michael the Archangel.

Walk all the way to Rome until the seventeenth-century Church of Santa Maria della Pietà, climb via Vittorio Emanuele and continue to the left for Via Principe Umberto leading to the entrance of Terra Murata. It is possible to reach it on foot with a 20-minute walk or take the small C2 bus leaving from the Church or a taxi, a choice if you want to visit Procida in one day only.

Crossing the ancient door enters another dimension, at another time almost. First stop the former Bourbon prison, silent witness of the history of this hamlet. No longer in use since 1988, it has recently been open to the public, on booking from the website of the Municipality of Procida: www.comune.procida.na.it.

By crossing the walls of the former prison, you are getting more and more into what is the oldest nucleus of the island, located high up in control of the Gulf of Naples. Here, between typical architectures, large courtyards overlooking small houses from the goose-neck staircase, between sun-drenched cloths and glimpses over the sea, you can see the Abbey of San Michele Arcangelo (XI century), jewel Set in the narrow streets of the village.

In addition to the church – beautiful with its 17th century chest of drawers (wood and gold) with the San Michele painted center that defeats Satana (1699) – it is possible to visit the museum complex that develops on the three floors below the abbey . Down the stairs, from small windows you can admire breathtaking views over the sea.

From Terra Murata, the Procida tour in one day continues by rigorously walking on foot to admire the breathtaking panorama. Just behind the door, on the left a small road leads to the Church of Santa Margherita Nuova, splendid with its almost metaphysical shapes, framed on one side by the ridge from which the Terra Murata dwellings and the eastern coast of Island, with a panorama from Corricella to the promontory that closes the Chiaia beach.

At the height of the Church of Santa Maria delle Grazie you turn to the left and finally go down the ladder you arrive in a small ancient and colorful world, Marina Corricella, made of fishermen intending to knit nets, children playing while women lay The clothes taking advantage of the sunshine that constantly kisses this magical place.

A puzzle of houses of different colors that are reflected in the transparent waters of the marina: a splendid scenery, also chosen to spin spots of famous brands (the last signed Dolce and Gabbana) and world famous films such as Il Postino (1994, Michael Radford), with Massimo Troisi and Maria Grazia Cucinotta.

A granite of Procidane lemons and a plate of “paranoia”, made up of small fish caught in one of the quaint little restaurants where you can taste the true island cuisine and return to the port to reach the last stop of the trip.

Chiaiolella and Vivara: between nature and sea.

Return to the harbor where near the sea station there is the bus terminal L1 or L2 leading directly to the opposite side of the island: Marina Chiaiolella. This is another lively center of the island, an unmissable stop for those who want to visit Procida in one day or even take a weekend to relax on the long beach of Ciraccio and Ciracciello, with views of Ischia and the islet of Vivara. Here you can dine in one of the long sea restaurants or in front of the beautiful dock tasting local tastes, or maybe indulge in a nice kayak ride to discover the mysterious Vivara islet.

A portion of the crater of the volcano once belonged to Procida, is connected to the island by an old bridge and is a protected nature reserve recently opened to the public only on reservation.